Pending the results of the 2016 Infodex study on advertisement investment, which will be announced Wednesday, February 22nd, we know from the 2015 advertisement study that internet advertisement investment increased by 15%. This important fact confirms the constant growth of the sector over many years and demonstrates that, after TV, internet is the predominately used channel to launch advertisments. This fact goes hand in hand with another piece of information from the 2015 survey: the use of mobile devices overtook the use of desktop computers. These facts are going to affect online marketing trends in 2017, a key year for brands to focus on directing personalized messages to their audience. This can be done through online advertising, especially when adapted to mobile devices.

To successfully execute public strategies and campaigns, it’s fundamental to know the most popular formats of online advertisement, and what each format contributes, in order to use them appropriately. There are a multitude of public formats, formulas, and channels on the online universe. On one hand we have search engine marketing (SEM), offering different network platforms (search, display, video, etc.), and on the other we have social media, a world of its own, with its own rules, language, and well-known formulas like emailing, dynamic retargeting, and native advertising. Themes that create independent theses by themselves. In this article we are going to focus on the standard and customary formats of online advertising in web display.

Most standard formats of Display advertising

Display formats are defined by two principal characteristics: pixel size, and space occupied inside a web page. The IAB establishes a standardization for these formats that you should learn.

The most basic are static, and occupy a fixed place in the web page. Their specifics are concrete except for dimensional variations to allow independent adaptation and integration of content to any web page. They are the most standard, and collect good results, in terms of the number of impressions and clicks generated by the specific content, without impairing the user experience. 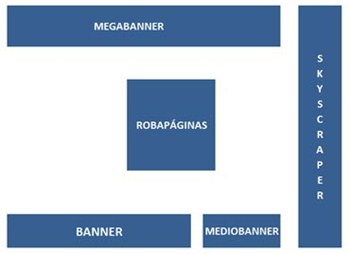 Within this group, we can distinguish the following formats:

The different banner formats, depending on their maximum weight, can be defined by two categories:

, where the maximum recommended size is between 40-50kb.

these formats exceed 50kb, and are usually in between 100kb and 10Mb. They include advanced functions like video integration or the dropdown function. 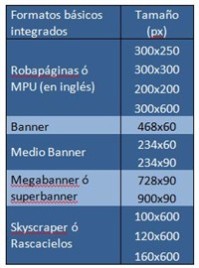 a) The expandable formats, which occupy a fixed position in the web, and grow in size when the user performs an action, for example, rolling over or clicking over the format; or automatically, depending on advertisers’ desires and media specifications. They are the same basic integrated forms as the previous ones with special features added to them.

b) Floating formats, which are different from the previous format because they don’t occupy a fixed position on the page. There are two types:

– Interstitial: They are usually more annoying to users since they activate before the webpage or section has fully loaded. Also, they are usually intrusive when navigating the web. They are not recommended if you don’t want to affect the user experience. They usually last 4 to 8 seconds with a standard size of 800×600.

– Layer: The same characteristics as interstitial, but with one big difference: it appears above the content once the web page is accessed, and is then gathered in an integrated format. It’s less invasive for the user, and is more integrated into web navigation. It’s a smaller format than interstitial, with a size of 400×400.

All of the special formats, “meddle” with user navigation, so they should display a close button.

Other common or interesting formats and formulas within online display advertising are:

Brand Day: a formula that reserves all of the advertising space of a certain website for one brand in one solid day, for a temporary promotion (Day without IVA), or another Branding action. They usually function well, acquiring many impressions and a good ROI.

Skin: a formula that presents the ad (fixed or animated) behind the web page’s content, “filling in” the holes in the page’s brand.

Pop-up, pop-under: are images that quickly appear in the middle of the content for a predetermined browsing time on the same page or section, or to complete a concrete action. They are usually ill-received by users because they are so intrusive. They can also represent an opportunity to include a call to action to buy a subscription or some other action.

Native advertising: the latest trend in online display advertising that is becoming more adept and advanced. Here, advertising integrates into a web page using the contents of the page as an advertising platform, integrated perfectly into the site’s layout and design. In this way, the advertising messages are visually integrated and over all contextual within the web page (this should keep the rest of the site’s content coherent), besides offering the added value of interesting and useful content for the site’s users. It’s less intrusive, adds value for the user and contributes to brand building.

Notably, on mobile devices, the behavior of dynamic formats vary due to a radical difference in interfaces: mobile devices use fingers instead of a mouse. Because of this, the programming behind these formats is different from those on desktops and laptops, and is able to adapt to different screen sizes using a responsive code.

How Influencia does communication strategies