The Rubius, or as he’s also known, Rubén Doblas, is one of YouTube’s biggest gamers. He’s managed to create one of the biggest online communities in the world and his channel has over 20 million subscribers…that’s as many as all the residents of Shanghai.

Reaching this figure was not a question of luck, but of being down to earth and having his head firmly set on his shoulders. El Rubius is exactly how you see him on the screen: warm and friendly, fun and chatty (when he doesn’t feel shy), and there is always a smile on his face whenever he meets someone new.

This is his persona, but there may be more secrets to his success. The secret behind how he has fans waiting with open arms to greet him whenever he travels worldwide. The secret of making an entire community and so much more out of almost nothing. Yes, El Rubius is one of the few people in the world that has reached a million retweets. He has done this in many different ways, but he has always done it while having fun. This was the video that sparked endless retweets and over 8 million shares.

LEMONADE… “If only we could be like El Rubius as well”. This is what many young adults and agencies think. No ladies and gentlemen, it’s not easy. It takes many years of work, many videos, and much sacrifice. It is charisma and discovering YouTube at the right time. It is being El Rubius…

…or Ellen Degeneres, and it is knowing to be clever enough (or having a great script), to take a selfie in the middle of the 2014 Oscars with Hollywood’s finest, then turn it into the most successful tweet in history. 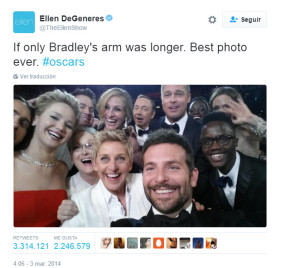 At Influencia.online we use many online strategies. We are not El Rubius, nor Ellen Degeneres, but we never stop working for the success of our clients, until it is greater than they could have ever imagined. We are a multi-disciplined team: from specialists in SEO/SEM to online advertising, through “Social Media”, and our own audiovisual production department. We have all of the necessary ingredients for you to make your mark. Want to begin? Contact us!